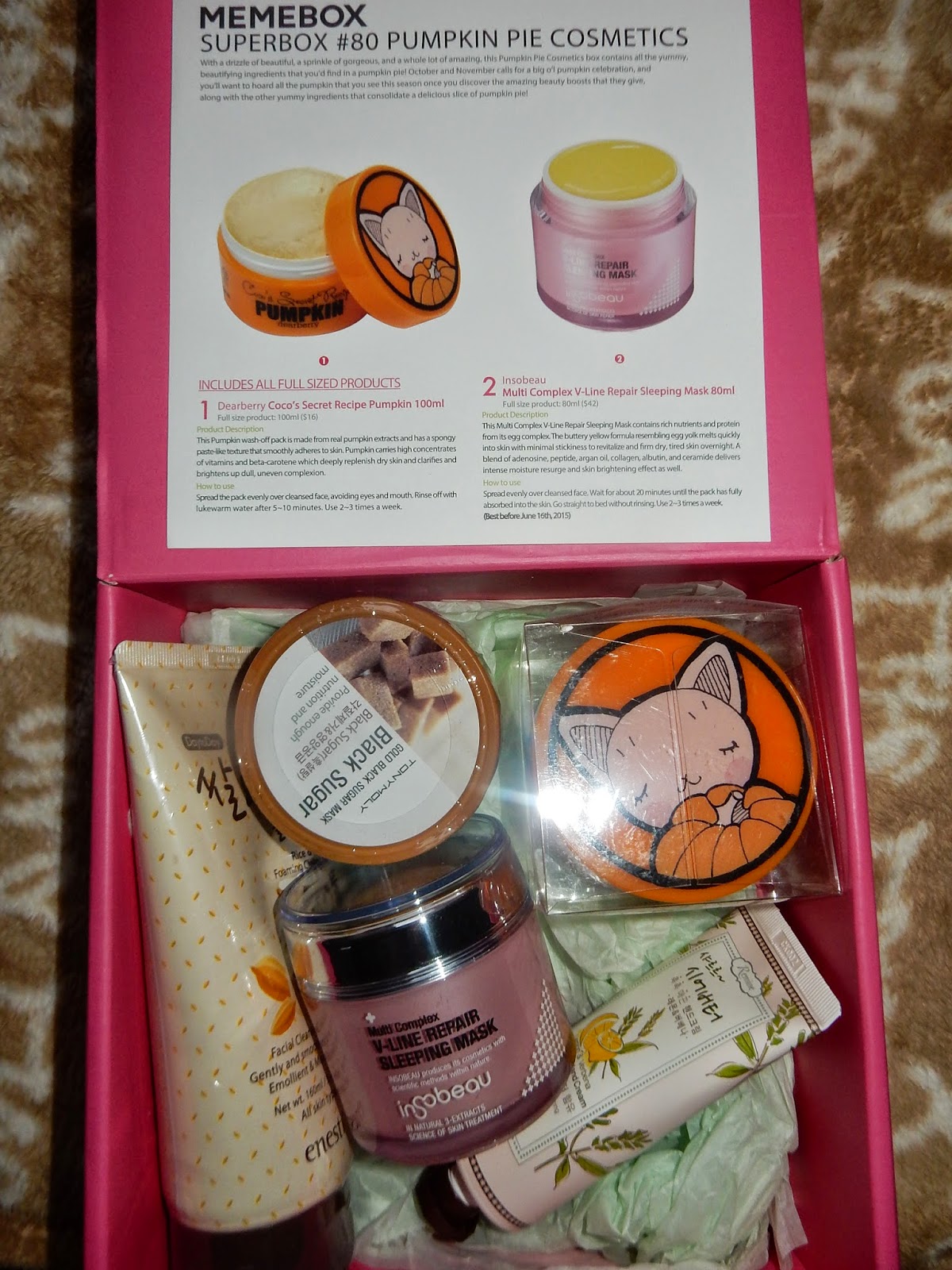 I don't really know what I was expecting from this box, the clue is in the name I suppose but I think the word cosmetics threw me and had me thinking it would be a make-up driven box, however there is no make-up her it's all skincare. For being a superbox it only contains 5 items which is a bit on the light side and it doesn't total up to much value, around $82 if that is to be believed.$5 for a hand cream could be right. 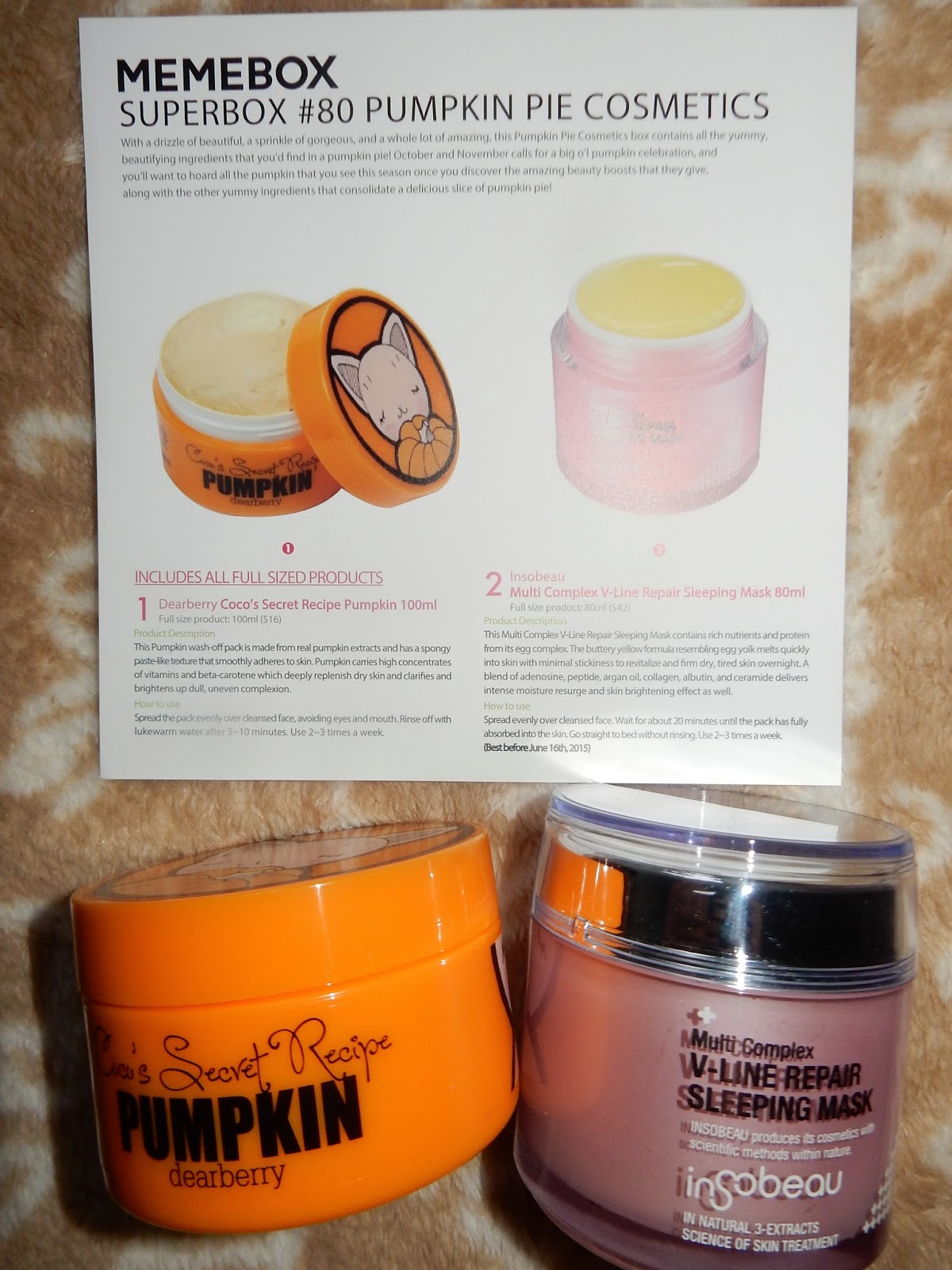 The first tub is the only thing that contains pumkin in the box so it took me a bit to work out what is actually going on? Could the box be curated on the ingredients to make a pumkin pie?

Dearberry Coco's Secret Recipe Pumkin 100ml ($16) - this seems to be a wash off pack for dry skin which is full of beat carotene, the texture is weird, described as spongy but I don't like it's stickiness. It smells ok but nothing to rave about. I can't find the shelf life on mine but don't imagine it to be long.

Insobeau Multi Complex V-Line Repair Sleeping Mask 80ml ($42) - So this is an egg based cream that gets it's yellowness from the yolk. It has a best before June 15 on it which doesn't surprise given all the egg in there. It also contains argan oil, peptides, collagen, albutin and ceramide although I imagine some of them will also come from the egg ingredient. I can't open any more sleeping packs just now so may gift this. 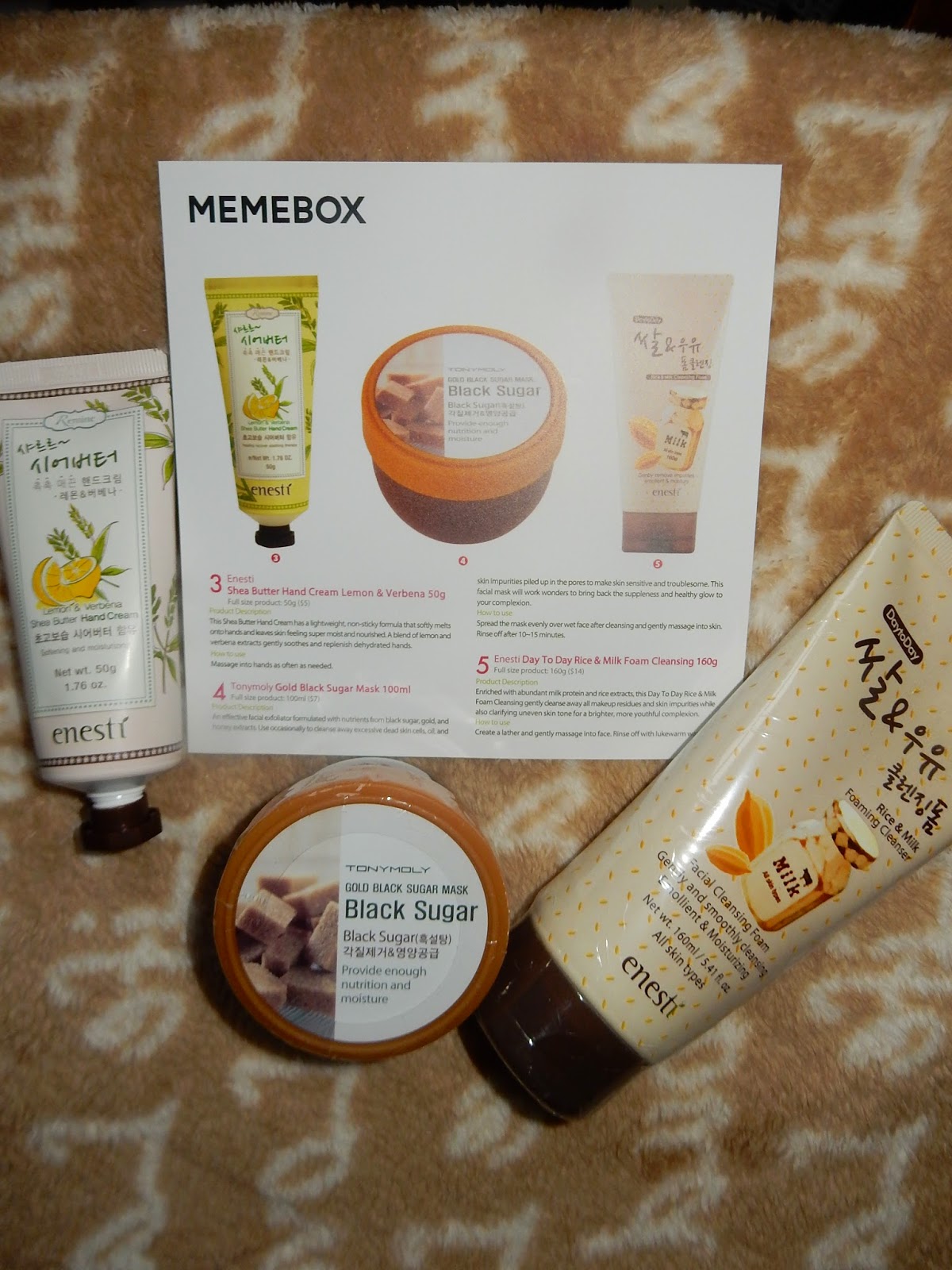 Enesti Shea Butter Hand Cream Lemon & Verbena 50g ($5) - I thik this has been around a few boxes and doesn't wow me, a cheap hand cream is easy to throw in as a filler, what verbena and lemon have to do with pumkin pie I'm not really sure, I know lemon stops apples from turning brown, maybe it has the same effect on pumpkin?

Tonymoly Gold Black Sugar Scrub Mask 100ml ($7) - I have this already and have not opened it as I usually make my own sugar scrubs. I have not tried anything with gold in it though so could be persuaded, either way I will need to get rid of a tub soon.

Enesti Day to Day Rice & Milk Foam Cleansing 160g ($14) - Another Enesti item but unlike the hand cream I want to try this, rice is meant to be good in cleansers in general and as it contains milk proteins it should be nice and creamy on the skin.

So Pumkin Pie Cosmetics you are not, all in all this box bored me a bit. I think the star of the show is the pumpkin mask and the box has been thrown together around it.